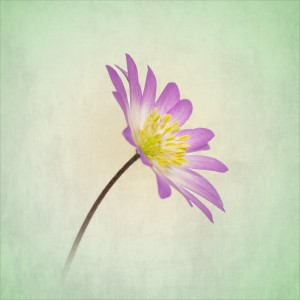 Our final competition of the 2021-22 season was our “Best of Year Competition” in which members submitted their best entries from throughout the year. It took place on 28 April; a physical meeting with additional Covid precautions, instead of being a virtual meeting on Zoom. The judge was Bob Webzell ARPS EFIAP, a past president of Brighton and Hove Camera Club and a member of the “Nature Photographer’s Portfolio”.

As might be expected, the standard was high, with everyone doing their best to achieve “Best of Year”.

The ‘Best of Year’ print was “Gently emerging” by Liz Barber – a well thought out, delicate image of a flower with subtle pinky mauves against a nice, equally delicate, background.

The ‘Best of Year’ PDI was ”Wasp drinking” by George Reekie – a highly competent macro image of a wasp landed on water and drinking, with vivid detail and an almost painterly background.

In total there were 16 print entries. Of these, three received the full 20 points, three received 19 points and four scored 18 points, all illustrating the high standard.

The prints scoring 19 marks were:

The prints scoring 18 points were:

The remaining images are too numerous to describe individually but also won plaudits from the judge, who was very impressed by the standard of printing in the club.

In total there were 26 projected images, of which four scored the full 20 points, two scored 19 points and 9 scored 18 points.

The four images scoring 20 were:

The two images scoring 19 points were:

Those scoring 18 points were:

The judge’s comments on all images, both prints and PDIs, may be viewed in the attached files. The images themselves may be viewed by following the links at the head of this report!

Following a very enjoyable evening, Martin Tomes brought the event to a conclusion with a vote of thanks to Bob, whose insights and tips had been much appreciated!