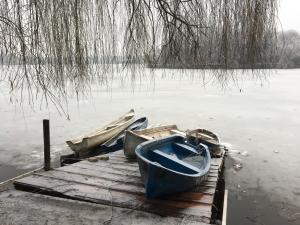 Our 3rd competition of the 2021-22 season took place on 20 January. Like the earlier meetings it was a physical meeting with additional Covid precautions, instead of being a virtual meeting on Zoom. The judge, Ken Scott ARPS, describes himself as a photographer, adventurer, speaker, coach and trainer from Sussex. He is well known to the club, is a member of Steyning Camera Club and runs training sessions for photographic judges.

Ken started off by explaining the basis of the scoring – the scores are relative and a score of 15 or 16 represents a good standard and a good image. Scores above this are exceptional in some way!  During his judging, Ken emphasised the good aspects of all images and gave many tips for improvement, which were appreciated by all.

The judge’s favourite print of the evening was “Downs’ textures” by Dean Sephton; a view over the Downs which immediately caught the judge’s eye. The composition highlighted different textures which led the eye through the image. The judge also praised the quality of the paper and printing.

The judge’s favourite PDI of the evening was “Spring is coming, Herastrau Lake, Bucharest” by Ruth Rusby. Showing ice receding from around boats at the lakeside as spring approaches, the judge said he could feel the cold and described it as a very successful image.

In total there were 16 prints. Of these two received the full 20 points, one received 19 points and one scored 18 points.

“Lighting the Corniche, Albert Embankment” by Janet Brown. Described as a clever piece of photography this was a minimalist image of distinctive buildings along the Albert Embankment – a fine example of ‘less is more’. A beautifully elegant image, well printed.

The print scoring 19 marks was “The Fat Controller” by John Gauvin. Described by the judge as one of the best images seen in a long time from this type of photoshoot, it portrayed a deep discussion between two railway workers and ‘oozed’ atmosphere

The image scoring 18 points was “Light on the Hills” by Martin Tomes. Showing sun bursting through clouds onto hills beneath. The judge described this image as very skilful for the way the photographer had maintained the detail and contrast throughout.

In total there were 30 projected images, of which three scored the full 20 points, one scored 19 points and three scored 18 points.

The image scoring 19 points was “ The Dancer” by George Reekie. This was highly praised for the use of colour and the sense of movement caught by the photographer.

The three images scoring 18 points were:

The judge’s comments on all images, both prints and PDIs, may be viewed in the attached files and the images themselves may be viewed by following the links at the head of this report.

Following a very enjoyable evening, Martin Tomes brought the event to a conclusion with a vote of thanks to Ken whose insights and tips had been much appreciated!