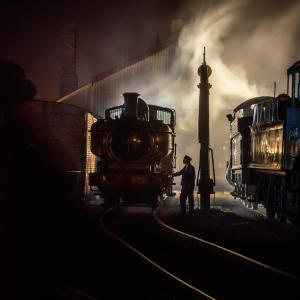 Janet Brown our chairman enthusiastically welcomed back our judge for the evening Rob de Ruiter from Bognor Regis Camera club, along with some visitors. Janet encouraged us to look at Rob’s website especially in relation to his ARPS panel in the Visual Arts category, this is entitled “Frozen remains” a fascinating interpretation of the subject. Rob proved to be a skilled judge, with honest comments to challenge and encourage us on in our photographic journey. His relaxed direct style gave us a really entertaining evening with much food for thought for those of us struggling with competition and praise and admiration for those whose pictures were a delight and of high standard.

So to the 26 prints with wide ranging subjects and of which 14 merited 18 points or more, so well done to all printers. There were 6 entries gaining 18 points, David Perks with 2, “Lancing College”, an internal view praised for good use of light and symmetry, well composed with good use of a wide angled lens giving no distortion, plus “The river Dart” leading to comment about use of shutter speed to determine detail in the water, almost a monochrome, but a little colour showed up in the peaty water. Next up Liz Barber’s “Distortion” taken in Newhaven in monochrome, which suited it well, giving excellent tones and detail, followed by Martin Tomes “Ford F-3”, the judge enjoying the patterns of age, the angle of the picture particularly appreciating the inclusion of part of a windscreen wiper, very good use of a close-in shot and composition. Martin’s “Angel Regent Street” also commanded 18, great use of a fisheye lens with excellent perspectives and a touch of colour which enhanced the overall picture. Last but not least in the 18s was Norman Kirby’s “Which way in a dark wood” a skilfully composed picture with an appropriate central point, a really well thought out image, perhaps a red coated walker would have lifted the picture said the judge!

The 5 images scoring 19 gave us some familiar names, Liz Barber with “Falls of Rha” a well taken shot with excellent use of monochrome and square format, Rob particularly enjoying the palette of light throughout the shot, Daisy Kane’s “Casting shadows” drew much comment and speculation from the judge, as it could have been two separate pictures, the whole picture was well seen and executed, Rob appreciating the time and thought given to composing the picture. Anne Nagle’s “Polecats playing” received much praise for the out of focus background, the interaction between the polecats and highlights in their eyes, then quite different “Fly past” by Chris West, which delighted Rob for the real sense of atmosphere and peace, excellent crop and it all works together, wonderful said Rob. Different again was Janet Brown’s “Subterranean” a London underground scene, which Rob enjoyed for its symmetry, interesting in its own right without people giving an interesting geometrical picture. Well done to the authors of these well presented interesting prints.

And so to the 3 who scored 20, very well done to comparatively new member Nigel Cherry for scoring two 20s for very different, skilled shots, “Spitfires passing at high speed”, which Rob praised enthusiastically for the excellent use of camera to capture speed, detail and positioning, tremendous said Rob, then quite different “Ahead by a neck”, a cleverly titled picture of giraffes in Africa, a wonderful shot giving a real sense of the environment, the sky and whole picture displaying beautiful colours throughout the image. The interchange between Nigel and the judge after the judging, helped us all to enjoy and appreciate the skills involved, thank you both.

The final 20 and print of the night, a stunning atmospheric picture beautifully presented by Chris West entitled “Night Shift”, a late evening shot in a steam railway yard, the judge waxing lyrical about the lighting on the rails and the smoke plus the light bouncing off the railway building well placed and balanced, all giving a real feel for times past . Rob enthused about the well chosen, gentle use of colour as against monochrome. Congratulations to Chris as we enjoyed the interchange between Chris and the judge again helping our appreciation of this top of the range picture.

A break for refreshments and time for a closer look at the prints before moving on to the 32 projected images of these, 14 gained 18 points or more, well done “diggies”. Nigel Cherry in the mix again scoring 18 for “RAF Typhoon with target in sight” the after burners showing well in front of an interesting sky, some discussion about camera speed and sharpness of the plane, which was indeed travelling very fast, another 18 was Norman Kirby’s “Fusion” a clever enhanced spiral of leaves giving an abstract image, which fascinated the judge for being different. My own “Ethiopian weaver and goods” gained 18 as the judge enjoyed the depiction of the setting and poverty of equipment, would have preferred a more direct look from the weaver and 18 for Derek Grieve for “Crane fly on ragwort”, which Rob praised for the good out of focus background with nothing to distract, as he enjoyed the focus on flower heads and crane fly alike. Now the five 19s, well done David Seddon for two in this category, “Restful Autumn infinity” a beautiful view of the tunnel of trees at Halnaker, much praised by the judge for the great cathedral effect with some discussion re whether or not people would have enhanced the shot, personal choice was the conclusion, secondly “Castle Stalker” a beautiful shot with glorious colours taken at a well chosen time of the day so giving excellent cloud formation, really well done. 19 for Norman Kirby’s “Godwit” where Rob really enjoyed the use of the mud to show the bird setting and the real sharpness of the bird, the highlight in the eye and the reflection the judge particularly liked. Kevin Harwood with “Little blue snacktime” gained 19 and much praise for the sharpness of the feathers, the detail especially in the surrounding water droplets from the bird feeding. The final 19 of the night to Carole Hazlerigg for “Sunrise reflections on the river Arun”, taken out of her bedroom window, which the judge praised for a nice atmosphere using sticks and “what was there” to create a worthy 19, how delighted we were to celebrate with Carole a new member, with her first 19, well done to you in particular and thanks to all who have helped and guided Carole.

Five were awarded 20 and caused the judge much soul searching to name PI of the night, well done to all five of you. Kevin Harwood with “Osprey Catch” a fine picture of an osprey with a fish, which the judge said was excellent and so difficult to capture. Very different Daisy Kane with “Windmill sky and sea” the judge enjoying the starburst monochrome effect, which he said worked well. Liz Barber with “Sunset Abstract” an excellent example of the use of deliberate camera movement, giving a lovely seascape with patterns, Rob loving the patterned progression of colours. Different again Janet Brown with “Happy urchins” giggly children enjoying being photographed in a “museum” setting, the soft effect working well, a fun picture of a serious scene with attractive lighting and muted colours, Rob seeing the whole thing working well.

And welcome back to winning ways with 20 and PI of the night, Derek Grieve with “Horse lady” Rob really appreciated the sense of excitement and genuine emotion, saying that the soft effect worked well, the highlight in the eyes and strands of hair all added to the whole, congratulations Derek and in discussion afterwards Derek shared the scene and the fact that this was a chance shot, but what a chance well taken!

The evening closed with a sense of satisfaction and hope that we have all learned something for our future photography.