Second competition of the 2021-22 season 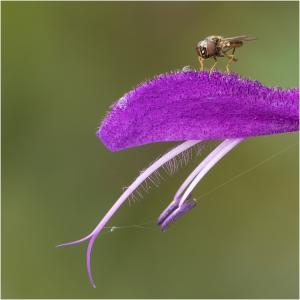 Our 2nd competition of the 2021-22 season took place on 9 December. Like the first meeting it was a physical meeting with additional Covid precautions, instead of being a virtual meeting on Zoom. The judge, Paul O’Toole from Worthing Camera Club, is well known to Storrington club members. His good-humoured commentary, anecdotes and helpful hints were enjoyed by all!

As usual the standard of both prints and PDIs was high; most images winning welcome compliments.

The judge’s favourite print of the evening was “Hoverfly on Weigia” by John Gauvin, a very skilfully taken macro shot of a Hoverfly, which was sharp throughout. Afterwards the judge was keen to learn what lens and techniques had been used.

The judge’s favourite PDI of the evening was “Parting Company” by Chris West. Taken in Cuba, this intriguing image showed a man walking away from a very interesting car. The judge praised the composition and its 1970s feel.

In total there were 16 prints. Of these, three received the full 20 points, one received 19 points and three scored 18 points.

The print scoring 19 marks was “Autumn Wind Passing Through” by Liz Barber, which the judge described as very skilfully and creatively depicting the motion of vegetation in the wind.

The three images scoring 18 points were:

The remaining images are too numerous to mention individually but also won praise from the judge.

In total there were 28 projected images, of which two scored the full 20 points, one scored 19 points and 5 scored 18 points, again illustrating the high standard.

The image scoring 19 points was “Cinnamon-chested bee-eater closing in” by John Gauvin. Another very skilful image, capturing the moment before a bee-eater reaches its prey, both captured in sharp focus.

The five images scoring 18 points were:

Following a very enjoyable evening, Martin Tomes brought the event to a conclusion with a vote of thanks to Paul, who had entertained all present, as well as provided scores and suggestions!