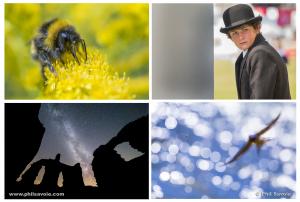 One of the benefits of lockdown is that speakers can be invited even if they live way beyond any generous interpretation of “local”. We were very fortunate to be able to have a virtual presentation by Phil Savoie BS MS MFA a former BBC Natural History Unit photographer who has worked on many of David Attenborough’s classic programmes. Originating in New York State Paul began as a photo editor for National Geographic in New York City when photographers were given 750 rolls of film for an assignment. With 45 years of professional photography experience, he shared some of his insights in Principles of photography.

His philosophy included the idea that every picture should tell a story and he urged us to practice telling stories, not just with one image, but a series of 3 to 16 images as the result of a project that would also enable the photographer to better know the subject. A good photo would bring good credit. He recommended directing the viewer’s eye and engaging with viewer with an image from a new perspective. Photos should transmit emotion and making photos was about clicking with people not just clicking people.

Phil also argued that one should make photographs for oneself. He recommended shooting in manual to emphasise that it is your brain that is making the image and you become more than just an operator. Other tips he mentioned included allowing at least half an hour to acquire night vision, using a handheld frame like a slide mount to decide how to frame a shot, especially in landscape and filling the frame with the focus of attention. There can be too much background.

After the break he turned to discussing some technical aspects, what he called his professorial bit. In particular he mentioned his work in testing lenses and showed how there was a deterioration in the quality of sharpness the further one got away from the centre of focus. About 99% of lenses, he argued, would have the optimum sharpness when focussed at f5.6. He demonstrated how whilst taking an image of a Welsh churchyard he could focus on the gravestones and achieve tack sharpness of the lettering and achieve a similar quality of sharpness by refocussing on the tower of the church much further away from the lens and combining the two images both focussed at f5.6.

Another tip, especially but not exclusively, for portraits was to set the camera 12-16 inches below the eyeline and shoot looking up. This was regularly done in movie photography. Looking up at a cow in a herd, for instance, gave the lead cow greater impact or power. A green tree frog photographed from above was much less impressive than one photographed from below with the head and eye the critical point of focus. Tabletop tripods can be useful for holding a handheld shot steady and for a large zoom lens a handle made it easier to use over a long period than holding the lens barrel.

The talk was well illustrated with examples of his work that can be viewed on his website. His final piece of guidance was to take up a challenge to spend a day with just a prime lens 35mm or 50mm (or a taped down zoom lens) and shoot wide open to judge the depth of field effect you want and then take a second shot at f5.6. If it does not quite work bump up the shutter speed a little.
The presentation was very much appreciated.