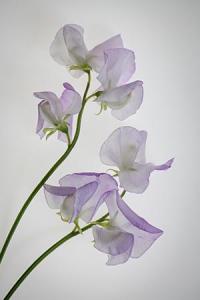 Our 4th competition took place on 22 April and was judged by Rob White; best known for his underwater photography but with wide experience of other genres. The competition took place over zoom and included both prints, previously forwarded to Rob, and projected images (PDIs).  As well as a score, he gave well considered comments on each image, together with useful hints for improvement. Rob was impressed by the standard of photography, as shown by the high scores.

The best PDI of the evening was “Twas a dark and stormy night ….!” by Nigel Cherry, a striking image of a man peering through a window on a stormy night, which the judge described as having an immediate and strong impact, “I wouldn’t want to meet him on a dark night”.

The best print of the evening was “Sweet peas” by Kristina Byng – a lovely and delicate image of sweet peas made especially beautiful by printing on matt paper, giving the appearance of a painting. A lovely composition, with instant impact.

… both were worthy winners!

In total there were 18 projected images, of which 4 scored the full 20 points, 2 scored 19 points and 4 scored 18 points, illustrating the high standard.

The four images scoring 20 were:

The two images scoring 19 were: “Broken fence” by David Seddon, a charming B&W beach scene cleverly processed  and “Heading over the ridge” by Dean Sephton a clever wildlife shot of deer going over the brow of a hill.

The four images scoring 18 were: “Reflection in the buffet car (Bluebell railway)” - a very clever and well spotted railway scene, “Walkers” by Daisy Kane – a lovely woodland scene with plenty of mood, “Slider turtles – Costa Rica” by Chris West – an interesting view showing the courting behaviour of two turtles and “Gull’s snack of the day!” by Anne Nagle – a well captured view of a gull having caught an insect.

The remaining projected images were also complimented but are too numerous to mention individually.

In total there were 22 prints. The judge was impressed by the high standard of printing, which reflected in the number of high scores. Out of a total of 22 prints, 6 scored the full 20 points, 4 scored 19 points and 5 scored 18 points.

The 6 prints scoring 20 points were:

The 4 prints scoring 19 marks were:

Those scoring 18 marks were: “G & T” by Dean Sephton - a very nice study of glass of gin and tonic with gin bottles alongside, “Winter Symmetry” by Kevin Harwood - a very artistic beach view with a stunning sky, “Last days of summer” by Bill Butland - a lovely B&W study of a viaduct – a very good composition, “Desert elephants” by Anne Nagle - a nice view of a mother elephant and calf in the wild and “Still life in stone” by Norman Kilby - nicely composed artistic view of large colourful stones.

Following a very enjoyable evening, Martin Tomes brought the event to a conclusion with a vote of thanks to David, whose careful judging and useful suggestions gave a very interesting evening!