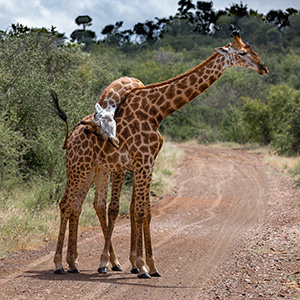 The 1st competition of the 2020-21 season took place on 8 October 2020 and was held via ‘Zoom’. Our judge was Mike Warren from Steyning camera club. Mike is a very experienced photographer and judge, well known for his coaching of photographers new to club photography. Throughout the evening, whilst reviewing our images, he gave welcome and well considered suggestions for improvement. He started by summarising the qualities judges look for when assessing images and the weighting given to each; 50% of the mark is based on imagination, impact and expression. Mike had been sent the prints (and PDIs) beforehand so that the actual prints were being judged, not PDI versions. Mike praised the quality of the images.

The best print of the evening was “Let me rest a while!” – a lovely wildlife image of two giraffes; a youngster resting its head on mum! Brilliantly composed and well printed, this was a worthy winner.

In total there were 34 Projected Images and of these 2 scored the full 20 points, 4 scored 19 points and 7 scored 18 points.

The two images scoring 20 were both by Nigel Cherry – “Playing an Irish reel!” judged best PDI of the evening, described above, and “Home Safe!”, a night-time shot of an Avro Lancaster bomber just returned to a cold and wet Lincolnshire airfield after carrying out a raid.

The four images scoring 19 were:

Derek Grieve – “So I said to my friend Barbara” a charming photograph of two young children talking whilst playing. The image told a very expressive story, clearly showing the interaction between two of them.

Tim Healey – “Wells Cathedral” a lovely image of Wells cathedral, taken low down with a river and trees in the foreground, giving a strong three dimensional character.

Liz Barber – “A winter’s Journey Home”. Described by the judge as ‘superb’ this image was very expressive, graphic and moody, depicting a car journey home on snow covered roads. A very strong composition.

Martin Tomes – “Bars”, which the judge appreciated very much for its imagination, impact and vibrant colours. It certainly grabbed the eye.

Liz Barber (“Prairie Impressions” – a very creative impressionistic landscape with lovely colour combinations), 2 images by Dean Sephton (“Beckford Stairs” – a beautifully crafted image of a spiral staircase, with lovely tones and sharp throughout and “Evening Vista” – a very imaginative and very peaceful landscape taken at dusk), Kevin Harwood (“Watch me mum!” – a lovely image of a baby zebra with its proud mother), Bill Butland (“Hanging on – just” a lovely mono-chrome landscape with strong lead-in lines), Daisy Kane (“Quiet country scene, Amberley”, a lovely peaceful image which could be mistaken for a Constable painting) and, last but not least, Norman Kirby (“Quixotic” a well crafted, very original and interesting image which almost defies description).
The remaining projected images were also complimented but are too numerous to mention individually.

In total there were 26 prints. The judge commented on the high standard of printing in the club before going onto give his scores. 4 prints scored 20 points, 7 scored 19 points and 3 scored 18 points. The number of high scores reinforces the high standard overall.

The 4 prints scoring 20 points were:

Kevin Harwood – “Let me rest a while” – the best print of the evening and already described.

Anne Nagle – “Wet and Ruffled Little Owl” - a gorgeous photograph of a Little Owl, fluffed-up after the rain.

Bill Butland –“Underneath the Arches, Haltwhistle” – a very interesting photograph, praised for its expressive quality and the quality of the printing.

Anne Nagle – “Ground squirrel eating” – a lovely and very skilful photograph of a squirrel, the tonal range indicating the environment and the shallow depth of field highlighting the squirrel.

The 7 prints scoring 19 points were:

Janet Brown –“Siryl’s Dartmoor Dreams” – a gorgeous photograph of a horse looking down into a valley.

Liz Barber – “Bronze Dahlia” – a daring and different interpretation of a Dahlia, showing the full texture of the flower – clearly a huge amount of thought had gone into it.

Kevin Harwood – “Pacific sunset walk” – a fabulously romantic, moody and very pleasing image of a couple talking a walk by the sea, with rocks in the distance.

Martin Tomes – “Four Men in a Boat” – a really good, yet simple, image, with a strong story line, showing four men in a boat in the English Channel.

Janet Brown – “Misty Morning in the Fjords” – full of atmosphere and showing a tug boat going about its business in the Fjords.

Daisy Kane – “Poppies” – a very delicate and skilful treatment of poppies in a field. The photographer was complimented on the way she had simplified the image and focussed the eye.

The 3 images scoring 18 points were: Liz Barber (“Californian poppy” – a very imaginative and stunning rendition of a poppy), Dean Sephton (A New Day – Ferring -  a lovely peaceful image of the sun rising over the beach, with light reflected off the sea) and Chris West (“Call of the wild” – a very interesting photograph of a large bird calling out in the forest.

Following a very enjoyable evening, Martin Tomes and Janet Brown brought the event to a conclusion with a vote of thanks to Mike, whose careful judging and useful suggestions gave a very interesting evening!