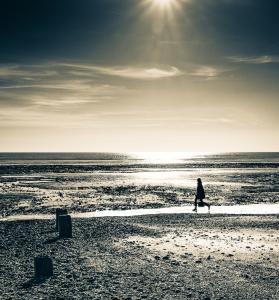 Our 5th competition of the 2021-22 season took place on 14 April; a physical meeting with additional Covid precautions, instead of being a virtual meeting on Zoom. The judge was David Hughes ARPS CPAGB BPE2*, based in Surrey. David’s primary interests are photographing wildlife and landscapes, though he has also photographed many other genres – quite fitting for reviewing our images!

Our 5th competition of the year is always ‘set subjects’, this year “breaking the rules” for prints and “negative space” for projected images. The images presented were particularly creative – we like breaking the ‘rules’ and many argue that there are no ‘rules’ in photography!

The judge’s favourite print of the evening was “Walking in the Sun’s Spotlight” by Dean Sephton; which broke several ‘rules’. Despite this the image worked well, telling a story and could even be used as an illustration in a magazine said the judge. Printing on matt art paper brought extra emphasis.

The judge’s favourite PDI of the evening was “Experienced Listener” by Nigel Cherry; described as a well-lit and beautiful portrait of an elderly lady, obviously listening to a speaker who remains out of shot - hence the negative space.

The prints scoring 19 marks were:

The two images scoring 18 points were:

The remaining images are too numerous to describe individually but also won plaudits from the judge, who was very impressed by the standard of printing in the club. A number of other judges have also made that comment, so it must be true!

The three images scoring 19 points were:

Those scoring 18 points were:

The judge’s comments on all images, both prints and PDIs, may be viewed in the attached files. The images themselves may be viewed by following the links at the head of this report.

Following a very enjoyable evening, Janet Brown brought the event to a conclusion with a vote of thanks to David whose insights and tips had been much appreciated.