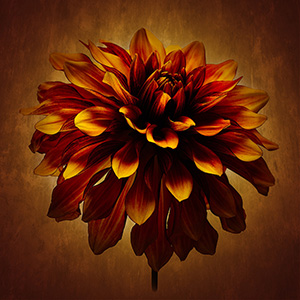 The last of our competitions of the 2020-21 season took place via Zoom on 13 May to choose the best print and best projected image (PDI) of the season. The prints and projected images were forwarded to our judge, Peter Rocchiccioli, ahead of the meeting. Peter is a very experienced judge from Chichester Camera Club. Whilst scoring the entries he gave copious suggestions for improvement.

The best PDI of the year was “World Cup Slalom” by Janet Brown; which the judge described as an excellent and very colourful action shot, showing the deep concentration on the face of the Olympic champion slalom canoeist. The judge complimented the photographer.

The best print of the year was “Bronze Dahlia” by Liz Barber; a very striking and beautifully presented image of a Dahlia with fantastic textures giving it the appearance of an oil painting, which the judge described as excellent.

As always, the standard of all images was high with much to commend them. The results are given in more detail below.

The three images scoring 19 were: “Evening Vista” by Dean Sephton; a very artistic landscape image over the S Downs looking towards the coast, with lovely colours at sunset; “Quixotic cornflower” by Norman Kirby; an unusual abstract image with movement, action and lovely texture, the judge urged Norman to do more of this; and “Harbourside” by Norman Kirby, an interesting picture of the decaying hull of a boat with psychedelic colours, described as a real photographer’s photograph.

The five images scoring 18 were: “Playing an Irish reel!” by Nigel Cherry; a lovely B&W portrait of a violin player in full flight as he plays an Irish reel, the movement fully evident; “Hierachy of Hats” by Chris West showing a nice railway scene including a railway manager, supervisor and driver in discussion beside a steam train; “Twas a dark and stormy night …!” by Nigel Cherry; a portrait of a story teller full of atmosphere and expression; “RX89” by Martin Tomes; a fishing boat surrounded by gulls circling round looking for titbits; and “Eyes on the Ball” by Kevin Harwood; a lovely action shot of a dog chasing a ball showing the excitement in the dog’s face.

The 2 prints scoring 19 marks were: “Stop right where you are!” by Nigel Cherry, a really well put together attractive image of a stag, staring straight at, and uncomfortably close to, the photographer and showing lovely colours; and “Iris” by Liz Barber; another of her beautiful flowers showing great skill in post-processing, bringing out the very best of the Iris and a really high-quality print.

The 8 images scoring 18 marks were:

Following a very enjoyable evening, Martin Tomes brought the event to a conclusion with a vote of thanks to Peter.