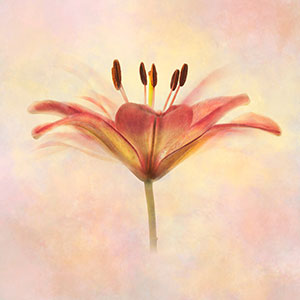 Our 2nd and 3rd print competitions both took place on 6 May, having been delayed from earlier in the year due to covid restrictions. The prints were forwarded to our judge, Malcolm Bull, ahead of the meeting which took place via Zoom. Malcolm is well known to the club and is very experienced in a wide range of genres. He was very pleased to be judging prints which he described as a rarity this season! Whilst scoring he gave some well-considered tips for improvements.

The best print in the 2nd competition was “Autumn Reds” by Martin Tomes; a wonderful woodland scene at High Beeches, with vibrant colours, and which the judge described as a fantastic photo; the photographer having thought deeply about the composition.

The best print of the 3rd competition was “Lily” by Liz Baber; a delightful and very attractive study of a lily, showing a great deal of skill, the centre of the flower being very sharp and the rest nicely soft and blending into the background.

As always, the standard of all images was high with much to commend them. The results are given in more detail below.

The three images scoring 19 were: “Iris” by Liz Barber; another very creative study of a flower, again executed and processed with great skill - the flowers appearing out of a misty, carefully blended background, “Hinderton Hall” by Martin Tomes; a very attractive B&W image of a steam railway scene, with plenty of steam, mood and character and “Reflection in the Buffet Car – Bluebell Railway”; showing distorted reflections of bystanders on the station platform and challenging the viewer to find the photographer!

The four images scoring 18 were: “1920’s Movie Still” by Janet Brown; a really nice B&W photo of two characters on a movie set, “The Kingfisher” by Anne Nagle; a charming portrait of a Kingfisher displaying all of its fine colours, “Aldwick Dawn” by Dean Sephton; a stunning beach scene with lovely reflections and “Scrub Hare” by Anne Nagle; a close-up portrait of a hare, showing wonderful detail – leaving the viewer wondering how she got so close?

The remaining projected images were also complimented but are too numerous to mention individually.

The 3 prints scoring 19 marks were: “Hoopoo” by Anne Nagle; showing the punk rocker of the bird world – a lovely composition of an interesting bird, “Stay right where you are!” by Nigel Cherry; showing large stag with beautiful colouring, popping out of the page but uncomfortably close and “Wings” by Martin Tomes; a gorgeous study of a swan swimming on a local pond and nicely framed by reeds.

The 4 images scoring 18 marks were: “The Mulberry Beetle (Cyanotype)” by Dean Sephton; a well presented and very artistic photograph of the decaying Mulberry Harbour, “A Wintry Journey Home” by Liz Barber; a very atmospheric, artistic and very original photograph which broke all the rules, “Gulls in the mist” by Daisy Kane; a captivating wildlife scene showing a large flock of gulls flying out of the mist towards the viewer and “After a stormy landing!”; a portrait of a military pilot stepping out of his aircraft after a difficult landing.

Following a very enjoyable evening, Martin Tomes brought the event to a conclusion with a vote of thanks to Malcolm.